Matrix Metalloproteinases (MMPs) — especially MMP-9 and MMP-2 — play important roles in neuroinflammation and are involved in a wide range of central nervous system (CNS) diseases, including Alzheimer’s, amyotrophic lateral sclerosis, multiple sclerosis, brain and spinal cord trauma, epilepsy, and stroke. In these disease conditions, MMP-9 and MMP-2 are upregulated in the CNS. By degrading the extracellular matrix in the CNS, MMPs damage the blood-brain barrier, resulting in edema and vascular leakage. Moreover, by interrupting cell-cell and cell-matrix homeostasis, MMPs can also trigger anoikis-like pathways of brain cell death. Besides targeting the matrix, MMPs can process a variety of growth factors and other extracellular cytokines and signals. In this regard, MMPs may contribute to neurovascular remodeling that accompanies chronic CNS injury. MMP-2 activation is regulated by MMP-14.

Figure 1 depicts the pathological mechanism of action of MMP-9 and MMP-14. 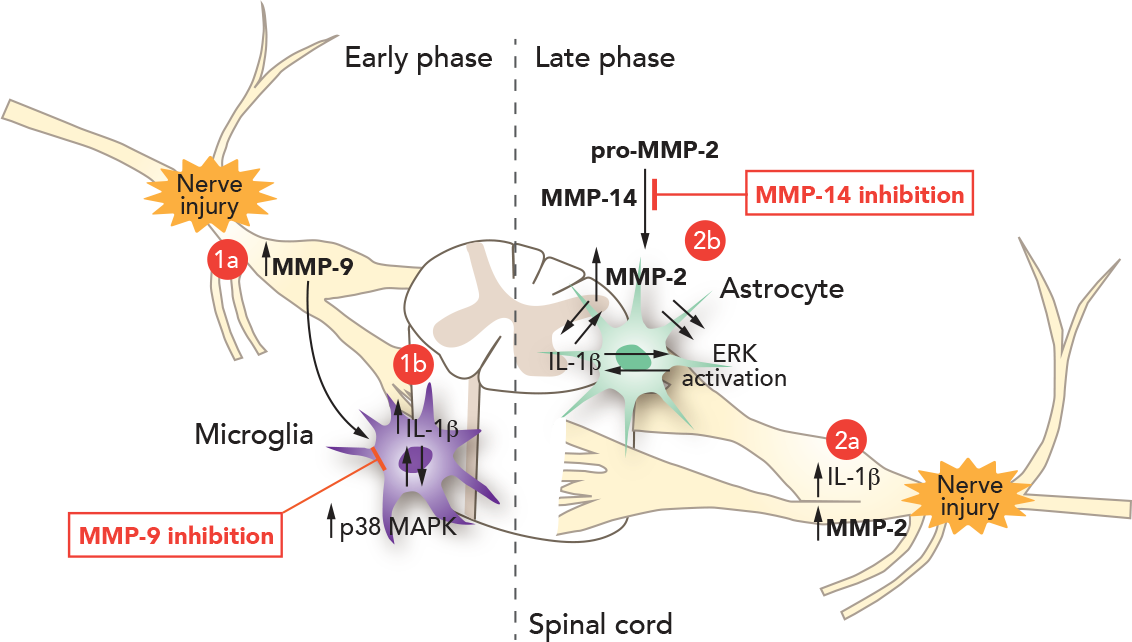 Accumulating evidence suggests that proteases play an important role in the development of neuropathic pain. For example, the lysosomal cysteine protease cathepsin S contributes to neuropathic pain facilitation via cleavage of the chemokine CX3CL1. Further, MMP-9 is upregulated in the sciatic nerve after nerve crush, leading to nerve demyelination by degradation of myelin basic protein. Scientists associated with Releviate investigated the distinct roles of MMP-9 and MMP-2 in neuropathic pain in the spinal nerve ligation (SNL) model. First, researchers examined whether and how MMP-9 regulates neuropathic pain. SNL at the L5 level produces rapid (<1 day) and persistent (> 21 day) neuropathic pain symptoms (e.g., mechanical allodynia) in rats and mice.

MMP-9 appears to induce neuropathic pain symptoms via IL-1β because the IL-1β neutralizing antibody can partially block MMP-9-induced allodynia. Interestingly, MMP-9 and IL-1β are co-expressed in the same dorsal root ganglion (DRG) neurons. IL-1β is synthesized as a precursor (31 kDa) then subsequently cleaved into a partially processed form (28 kDa) and completely processed into a mature form (17 kDa). The precursor form of IL-1β shows no biological activity. Caspase-1 is well known as an IL-1β converting enzyme, but this enzyme is not regulated after nerve injury in the DRG and spinal cord. Other enzymes, such as MMP-9 and MMP-2, were also implicated in IL-1β cleavage. SNL induces a marked IL-1β activation (cleavage) in the DRG in the early phase (day 1). But this activation is abrogated in mice lacking MMP-9, suggesting that MMP-9 is needed for IL-1β activation after nerve injury. Injection of MMP-9 is also sufficient to induce IL-1β activation in the DRG.

It was hypothesized that nerve injury-induced spontaneous discharge in sensory neurons releases MMP-9 and pro-IL-1β to the extracellular matrix. In the matrix, MMP-9 cleaves pro-IL-1β to produce active IL-1β, which then acts on adjacent nociceptive neurons to produce hyperexcitability. MMP-9 in DRG soma is transported to central terminals in the dorsal horn to activate microglia. At the spinal level, MMP-9 is sufficient to activate microglia even in a low dose that does not produce demyelination and apoptosis. MMP-9 induces neuropathic pain by activating IL-1β and microglia in the early phase. MMP-9 may also induce aberrant neuronal connections in the spinal cord, which is important for the development of neuropathic pain.

Thus, by targeting MMP-9 with RLVT-9-01, our human anti-MMP-9-specific, patented antibody, Releviate Therapeutics will likely target pain at its source.

1. Is an efficient and unique NG2 sheddase

2. Sheds NG2 on NG2-Mφ, which infiltrate the PNS after injury

3. Is present in the PNS both as the inactive stoichiometric TIMP-2·MMP-14 complex and the active enzyme

4. Translocates toward the nodes of Ranvier and such substrates as NG2 postinjury

5. Can be selectively inhibited to enhance sensory axonal growth and reverse the established hypersensitivity in the rat PNS injury model