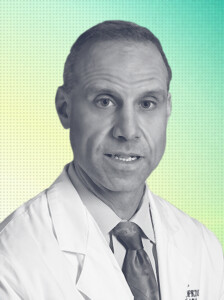 Dr. Steven P. Cohen obtained his medical degree at Mount Sinai, completed an anesthesiology residency at Columbia University, and a pain fellowship at Massachusetts General Hospital. He is Professor of Anesthesiology & Critical Care Medicine, Neurology, Physical Medicine & Rehabilitation and Psychiatry and Behavioral Sciences at the Johns Hopkins School of Medicine and Uniformed Services University of the Health Sciences. He is also Chief of Pain Medicine and Director of the Blaustein Pain Treatment Center at Johns Hopkins.

Dr. Cohen has been active in teaching and pain research, having published over 350 peer-reviewed articles and book chapters in the past 20 years. Among his major contributions are the development of an FDA-approved denervation technique for treating sacroiliac joint pain (radiofrequency ablation), helping set up the first pain clinic in a war zone, inventing the IV ketamine test, performing the first studies evaluating the epidural administration of biological agents for pain, serving as the Senior Investigator on the Congressionally-mandated study evaluating compounded topical creams for chronic pain, serving as Committee Chair for the national ketamine guidelines for pain management, serving as Committee Chair for an international consortium for lumbar facet blocks and radiofrequency ablation, serving as Committee Chair for multispecialty guidelines on pain management during COVID-19 and serving as Co-Chair for cervical facet joint guidelines. He has also conducted research on facet arthropathy and epidural steroid injections that has changed the way the conditions are viewed and treated. His articles have been published in some of the top general medical journals including “Lancet”, “Mayo Clinic Proceedings”, “CMAJ”, “BMJ”, “Annals of Internal Medicine”, “JAMA” and the “New England Journal of Medicine”. His research has also been featured in the New York Times 4 times and he has been the first author on the “Pain” chapter in the last 3 editions of “Cecil Textbook of Medicine”. He is currently on the Board of Directors for the American Academy of Pain Medicine and the Executive Board for ASRA and is the Principal Investigator on about $20 million in federal grants.

In addition to his academic work, Dr. Cohen is a retired Colonel in the U.S. Army, and was deployed 4 times in support of operations in Bosnia, Iraq and Afghanistan. His research was instrumental in the passage of the 2008 Military Pain Care Act, and he served as an inaugural member of the U.S. Army Medical Advisory Board. His previous awards include the American Society of Regional Anesthesia & Pain Medicine John J. Bonica Award, the American Academy of Pain Medicine Founder’s Award, the American Academy of Pain Medicine Presidential Citation x 2, the American Society of Interventional Pain Physicians Public Service Award, the Donlin M. Long Pain Award, the Eastern Pain Association John J. Bonica Award, multiple Teacher and Mentor of the Year Awards from the Johns Hopkins School of Medicine, the Military Health System Distinguished Service Award, the Order of Military Medical Merit, and the Legion of Merit.

< BACK TO SCIENTIFIC ADVISORY BOARD